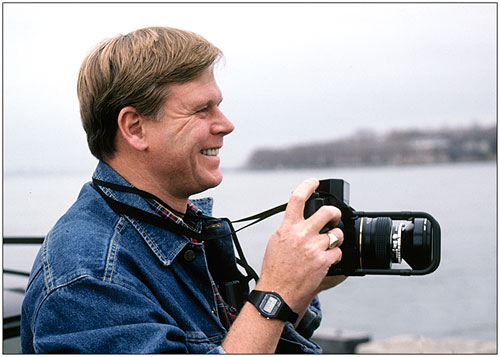 Tom Young began his photographic pursuits while growing up on the South shore of Long Island, NY. He started taking pictures to facilitate his drawing skills using his father’s Argus C3 and became so enamored with the photographic medium that he gave up drawing altogether. Working at Bay Shore Photo, Tom found a mentor in Nora Kolczynski, the studio’s proprietor. In 1970, he sought entrance into fashion photography, apprenticing in New York city with the well-known Neal Barr, and later with Dick Wolf. Young’s interest in fashion photography waned and he left the field to pursue another career. In 1983, he circled back and began to build a successful career in commercial photography that has lasted 28 years.
Young’s personal “style” has defined his images from the first studies of “Bottle on the Beach” to his present work. His objective is to present the essence of his subject while keeping technique in a supporting but anonymous role.
A resident of Westchester for thirty nine years, Young is known by friends and family for surfing the beaches of Long Island, salt water fly fishing along the rocks of the Sound and sailing the same waters with friends. When not out shooting the landscape and lifestyle that he loves and that are unique to Rye and Long Island, Tom Young continues his award-winning career as a commercial photographer in his Port Chester, NY studio. Among others, his corporate clients have included C.M.Almy, Fuji Photo Film USA Inc., Northfork Bank, Pepsico, SoBe, Time Inc., Tommy Armour Golf and Corbis Stock Market.